Posted by GreenSlugg Muse on Wednesday, November 30, 2016,
I am not sure who originally wrote this. It is floating around the Internet and taking on a life of it's own. I just wanted to reshare it here. I don't know how common the bizarre reactions described in this piece are, but it's a perspective that needs to be heard, and to paraphrase the authors at Steven Crowder's organization, we need to "Stop gaying all the things."

Atheists and the Founding Fathers

A friend of mine who considers himself to be a Liberal Christian recently shared a meme on FaceBook from an Atheist page.

The meme essentially argues that America was intended to be a Secularist nation. Of course, history does not support this idea. America was intended to be a nation where people are free to worship and practice whatever religion they choose. But Atheists and Liberals often conflate religious freedom with Secularism. The irony is that Secularism has historically been the bane...
Continue reading ...

Is Whitewashing Still a Thing?

Posted by GreenSlugg Muse on Tuesday, November 22, 2016,
A very interesting, and very forward-thinking perspective that I think will surprise you!

Also, keep in mind that the Ghost in the Shell character is an android/robot? I enjoyed the franchise some years back, but don't remember the details. Maybe it's time to re-watch the anime!

2016 Political Correctness in a Nutshell

Posted by GreenSlugg Muse on Monday, November 21, 2016,
2016 Political Correctness with regards to criticizing any particular movement, especially Islam and BlackLivesMatter.


A little piece I came across in a thread online: "Not all Nazis hated jews. Nazism is a regime of peace. The holocaust was an isolated event. Do not confuse Nazi Terrorists with peaceful Nazis. It's 2016, stop being Naziphobic you bigots. Hitler was a loving person you just need to interpret Mein Kampf better."

Did I just compare BLM to Nazis? Why yes! Yes I did.
Continue reading ...

Posted by GreenSlugg Muse on Monday, November 21, 2016,
One of my best friends, Noah, sends me a devotional that he writes everyday via Email called "Encouragement". It usually contains a short Bible passage and a small word of encouragement.

Tonight I want to flip that notion on it's head, but still in a positive, and encouraging way.

I recently had an issue with a few fruit flies in my bedroom. Not an infestation, just a couple of the annoying creatures that hit my face here and there while I am trying to sleep.

One solution I found was to mix appl...
Continue reading ... 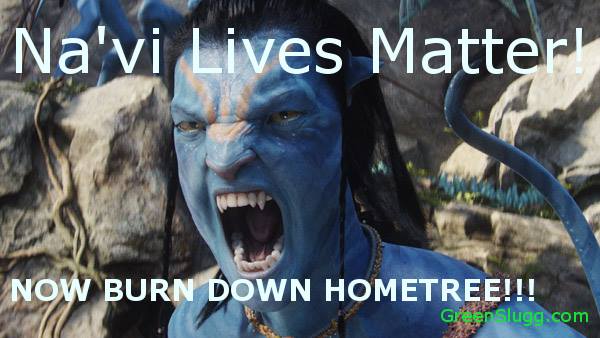 Posted by GreenSlugg Muse on Saturday, November 12, 2016,
Two versions of a new meme. Made these memes a week or two ago, but had issue with formating. 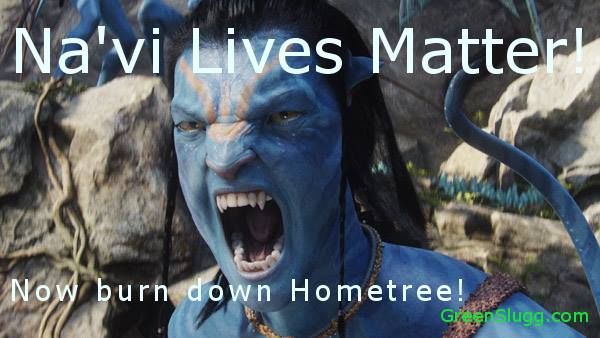 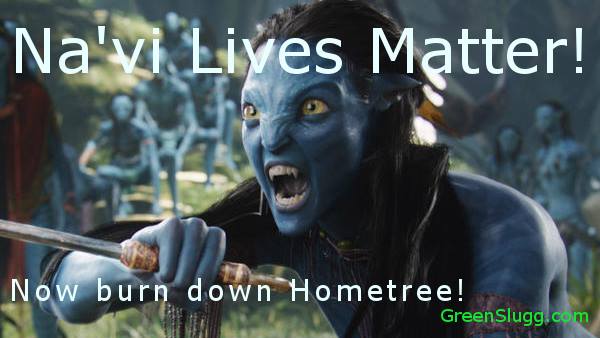 Atheists ... this is why we can't have nice things!

Posted by GreenSlugg Muse on Saturday, November 12, 2016,
See, this is why we can't have nice things. Whenever I hear outspoken Atheists talk, even well-known Atheists who are scientists, it's always almost nothing but nonsense that dribbles out of their mouths.
"Religion is bad - hahaha." Nevermind that Christianity gave us modern science, or the fact that Atheist and Darwin-Inspired ideologies have killed more people than anyone.
The reason people in the Middle Ages didn't have as much as us, is because they laid the scientific foundation for everyt...

Posted by GreenSlugg Muse on Saturday, November 12, 2016,
There are those who insist that we have to assume the religion of Naturalism in order to do science ... didn't realize I was required to turn my brain off before walking into a lab.

Posted by GreenSlugg Muse on Friday, November 11, 2016,
To dovetail off of my last post. We need to come together with respect, reason, and logic. Liberals and Conservatives need to stop acting like children. The name-calling and the gloating need to stop.

We need to start talking about the issues logically, and with cool heads.

"I believe that raising minimum wage will help poor people." - How do you know that to be true, what facts do you have to back that up?

"Women only make 70 cents for every dollar that a man makes for the exact same work." - W...
Continue reading ...

Posted by GreenSlugg Muse on Friday, November 11, 2016,
Guys, ... seriously. You can't talk about "tolerance" while screaming "RACIST" in the face of everyone who disagrees with you.
Those who are gloating in the faces of Democrats ... knock it off.
Those of you who are screaming "racist-bigot-homophobe" at anyone who voted for Donald Trump, or who simply disagrees with your politics, again, please stop, you are only making yourselves look foolish.
With regards to the childish charges of "racism" leveled at Donald Trump, and all non-Liberals:
Islam is...

Pray for Our Nation, and for Hillary Clinton

Please pray for our nation. We need it today. And pray for Hillary's health. I voted against her (I voted more against her than for Donald Trump). But our country needs prayer, and so does she.

Posted by GreenSlugg Muse on Wednesday, November 9, 2016, In : Political/ Social
I had someone tell me a few minutes ago that a fetus does not even look human until towards the end of the third trimester. ...I was personally shocked at the lack of understanding of basic biology.
This is a picture from the NIH of a "fetus" terminated during the second trimester.
https://openi.nlm.nih.gov/detailedresult.php?img=PMC4001423_bjmg-16-02-91f4&req=4

Posted by GreenSlugg Muse on Wednesday, November 9, 2016,
This needs to be seen.

Posted by GreenSlugg Muse on Wednesday, November 9, 2016,
The election is over. Please keep praying for our country. The God of Israel is the only God who can help us.

Pray for This Country!

Posted by GreenSlugg Muse on Tuesday, November 8, 2016,
For those of you who are Christians. Let's all go and pray for this country. I voted today, but a prayer is worth more than a vote.
I've spent enough time arguing with people over politics on the Internet today.

Posted by GreenSlugg Muse on Tuesday, November 8, 2016,
Definitely a find! Bart Ehrman VS the ultra-fringe historian Richard Carrier. Get out your sodas and your popcorn!

Carrier is one of a very very very few ultra-fringe historians who denies that Jesus existed. His arguments make absolutely no sense, rationally speaking. But he is becoming popular in uneducated Atheist circles.

Posted by GreenSlugg Muse on Tuesday, November 8, 2016,
Before you start talking about male privilege... realize that we go through a lot, just like women do. But we usually don't have a safe outlet.
#FeelingBlessed

Democrats. Stop calling everyone who disagrees with you "racists"!

Posted by GreenSlugg Muse on Tuesday, November 8, 2016,
Democrats. Stop calling everyone who disagrees with you "racists"! You just make yourselves sound like children when you do so. Your party fought for slavery, founded the KKK, and pushed for segregation. To this day, Democrats are the ones who oppose school choice, forcing poor black families to send their kids to failing Democrat-run schools.
Learn to be peaceable with other people, stop calling people names, and learn to think and argue with logic, instead of solely with emotion.
Not everyone...


This election be like: Darth Vader or space Yeti?
Continue reading ...

Posted by GreenSlugg Muse on Wednesday, November 2, 2016,
A quote floating around the interwebs:

"In the entire first Christian century Jesus is not mentioned by a single Greek or Roman historian, religion scholar, politician, philosopher, or poet. His name never occurs in a single inscription, and it is never found in a single piece of private correspondence. Zero! Zip references!"

This is a quote from Bart Ehrman, but is grossly out of context. This quote is also problematic, because there are First Century historians who mentioned Jesus, but that's...
Continue reading ...

SJWs when white people move out of the city: "White flight!"

SJWs when white people move back into the city: "Gentrification!"

SJWs when you have no minority friends: "Segregation!"

SJWs when you have minority friends: "Tokenism!"

Scripture Out of Context

Posted by GreenSlugg Muse on Wednesday, November 2, 2016, In : Critical Thinking
"Yield now and be at peace with Him;Thereby good will come to you." Job 22:21

I just saw the 700 Club use this verse to encourage it's viewers. Of all the books in the Bible, Job is the one book that we have to be the most careful of with regards to the context.

In the context of this verse, we are seeing a speech from one of Job's foolish friends, and the concept taught here was later rebuked by God Himself.

Job's foolish, but well-meaning friend, was telling Job that he was obviously in sin. A...
Continue reading ...

Posted by GreenSlugg Muse on Tuesday, November 1, 2016, In : Political/ Social
If you haven't taken the time to really understand the issues, and to hear both sides of things, to reach past the spin of not just their party, but your own as well, please don't vote. America does not need uninformed idiots voting for any office in the land.

Continue reading ...
« Back to posts