Atheists and the Founding Fathers

A friend of mine who considers himself to be a Liberal Christian recently shared a meme on FaceBook from an Atheist page.

The meme essentially argues that America was intended to be a Secularist nation. Of course, history does not support this idea. America was intended to be a nation where people are free to worship and practice whatever religion they choose. But Atheists and Liberals often conflate religious freedom with Secularism. The irony is that Secularism has historically been the bane of religious freedom in any country where it is the official religion of the state, as Atheists insist on making it here in the United States. But Secular Humanism isn't neutral, it's just as much of a religion as any other, even if we choose not to call it by it's name.

The basis of the Declaration of Independence was that all men are created equal and endowed with inalienable rights by their "Creator". Atheism in general is obviously incompatible with the belief that God gives rights to man. The "Creator" spoken about here is not the millions of years of death, disease and destruction that is key to any sort of Darwinism. While Atheists can behave in a moral fashion, under such a Worldview, they have no basis by which to justify such a morality, or to impose morality on others by creating laws that say "Don't cheat" "Don't steal" etc. On this note, my Socialist uncle once told me that "You can't legislate morality." I looked at him funny in response, because there isn't a single law in existence in which morality is not legislated.

Furthermore, the idea that "All men are created equal" and that we have equal dignity before God is something clearly taught in the Bible, however it runs completely contrary to the teachings of Hinduism, with the caste system, or Islam, with Mohammed's teachings in the Koran and Hadith.

In other words, the idea that all men are created equal assumes a Christian Worldview. At the very least, it borrows extremely heavily from the Bible, and the obvious influence cannot be escaped.

This brings us to the Constitution. The Bill of Rights guarantees certain rights that cannot be taken away. These rights aren't merely bits of ink of pieces of paper. I once had a Liberal "pastor" or "theologian" pompously say that the inalienable rights given by our Creator is from the Declaration of Independence, not the Constitution. -_- This was a guy who clearly thought he was the smartest person in the room, but wasn't very bright.

The whole point of having a Bill of Rights was the philosophy that man had rights and dignity that were given to him by God, which the government had no right to take away. Unless man has some inalienable dignity, the Bill of Rights makes no sense.

At the end of the day, the idea that you can have a government that is "neutral" is sheer fantasy, and makes no sense. The ideal government is one which rules based on the principles given to us by God, as the Founding Fathers designed our government, including those who were more secular. This government should afford man with a measure of free will, so that man is not forced to be outwardly moral, but which protects it's citizens from the more severe abuses of others, and themselves. Finding that balance is where it becomes difficult, but a measure of both freedom, and law is needed.


It amazes me how Atheists try to rewrite history to make the Founding Fathers and every historical figure that Americans admire into Atheists, including Abraham Lincoln. 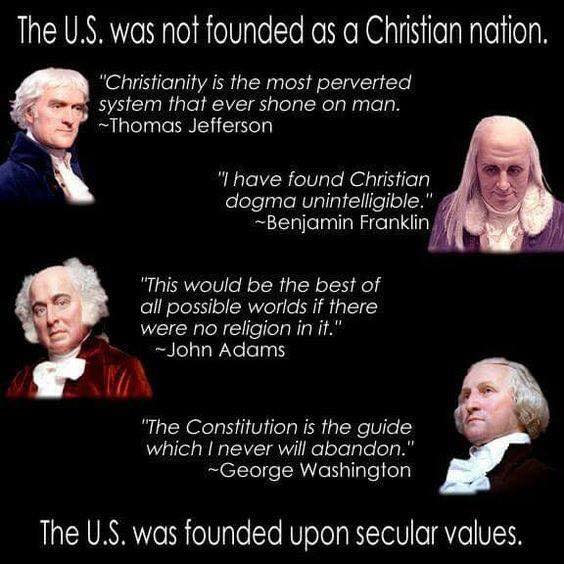 The problem with the logic of this meme is that these quotes are grossly and intentionally taken out of context. If you read the whole quote from John Adams, for example, he is actually saying the exact opposite.
Twenty times, in the course of my late Reading, have I been upon the point of breaking out, "This would be the best of all possible Worlds, if there were no Religion in it"!!! But in this exclamati[on] I should have been as fanatical as Bryant or Cleverly [Adams' boyhood parish priest and Latin school master]. Without Religion this World would be Something not fit to be mentioned in polite Company, I mean Hell.
http://www.fallacyfiles.org/contexts.html


It's no secret that Ben Franklin was no Christian. No one as far as I know is under the delusion that he was. This is the guy who chased around French girls in his sex parties in France.

Interestingly, I would argue that Ben Franklin would certainly agree, were to to ask him, that his religious beliefs and his moral beliefs were very much influenced by his Christian upbringing.


A quote from a very succinct, but very well written article on the topic of Ben Franklin's religious beliefs, which changed over the course of his lifetime:

"Franklin's early commitments to Deism did not last long. His flirtation with this world view was little more than a form of youthful rebellion against the Calvinism of his Puritan upbringing. Although he never returned to the Calvinism of his childhood, the religion of his parents leavened much of his adult thinking. Franklin believed in a Creator - God who possessed great wisdom, goodness, and power. This God not only created the world, but sustained it. Franklin was amazed, for example, at the way God created the stars and the planets, but was even more amazed that God continued "to govern them in their greatest Velocity as they shall not flie off out of their appointed Bounds nor dash one against another, to their mutual Destruction."

Franklin put his faith in an active God who watched over his natural creation and could, on occasion, intervene in the lives of his human creation as well. Thirty-six years after he claimed to embrace Deism, Franklin sounded like anything but an adherent to this religious system. "Without the Belief of a Providence that takes Cognizance of, guards and guides, and may favour particular Persons, there is no Motive to Worship a Deity, to fear its Displeasure, or to pray for its Protection," he wrote. This was also a God who answered prayer. Franklin wrote prayers for his own personal use and took time to rewrite the Lord's Prayer so that it was more suitable to contemporary readers. In July 1787, during the meeting of the Constitutional Convention in Philadelphia, Franklin called for prayer to bring reconciliation to the political differences of the body.

Yet for all of his talk of God and his providence, Franklin's religious creed falls far short of orthodox Christianity. His beliefs were less about Christian doctrine and more about virtue - moral behavior that serves the public good. He labored to instill character in his life, going so far as to attempt "moral perfection" through the daily cultivation of thirteen different virtues. He had little tolerance for theological squabbles often associated with organized Christianity and thought debates over the meaning of Christian orthodoxy prevented clergy from preaching the true spirit of Christianity, namely, loving one's neighbor."

Also, this was not the actual quote. Thanks to Ed Brayton at Patheos for finding the real quote.

“Those who live by mystery and charlatanerie, fearing you would render them useless by simplifying the Christian philosophy — the most sublime & benevolent, but most perverted system that ever shone on man — endeavored to crush your well-earnt and well-deserved fame.”

As for George Washington, I have to point out the painfully painfully obvious. Saying that the Constitution is our guide hardly proves that Washington wanted a Secular Humanist nation.


A similar meme with refutations by an Atheist 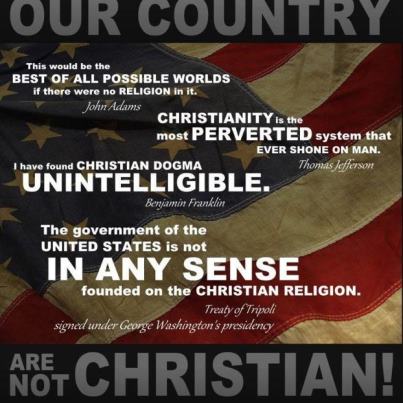